Croquet is a very old game that had its beginnings in the early 1400’s.

Croquet is a game that can be played by people as young as 10 but it is an ideal game for those in the senior age group.

It one of the few games that can be played by people into their 80’s and, with the population in Australia ageing, its popularity is growing.

It can be played equally well by men and women. It is a game that provides moderate physical exercise with a fair amount of mental stimulation and has been recommended by the American Heart Association for its cardiovascular benefits.

Each of the games involves skill in hitting a ball and tactics to outwit the opposition. It can be a ‘no holds barred’ battle on grass, as each team attempts to ‘win’ more hoops than their opponent – but in a very civilised way – NSW Croquet.

The Central Coast provides participation options for those interested in Croquet, with the EDSAAC Croquet Club welcoming all new participants and providing a fun, enjoyable, welcoming and social atmosphere for all members.

Croquet has been described as ‘a nasty game played by nice people’. 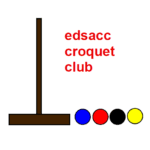